While facing a version of Columbus official History, we may choose to believe in different stories and films. It is well known that, before Columbus, regular voyages to the West were taking place, and the Portuguese knew exactly were Columbus had landed. In fact, King John II set immediately a fleet to the Antilles to prevent a second expedition. The official version has been ridicularized ever since, using an underground style in Art. For instance, the Harlequin, or Pulcinella, and his mistress Columbine (Pierrot's wife) try to tell part of the story, in a 16-17th century Comedy style.

A "Pulcinella secret" is understood to be a secret that almost everyone knows, but nobody acknowledges it... In this Columbine ball, the European courts found an amusing way to exclude the people from the truth. Moreover, in Spain, Pulcinella was also called Don Cristobal Polichinelo. Thus, you have the pair Don Cristobal and Columbine, it is not exactly Don Cristobal Columbus, but it would be difficult to be more explicit. 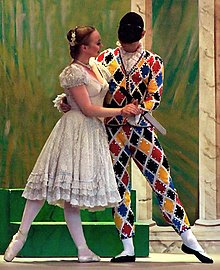 The Columbine ball.
(Disclaimer: no connection is intended with "Bowling for Columbine")

4. Pizzigano map
The oldest Portuguese chart held by Prince Henry in 1424 reports not only Madeira and Canary islands, but also Azores (only officially discovered in 1432). Moreover it signals as Archipelagos the Antilles in a red rectangle, and Satanazes in a blue one... almost 70 years before Columbus voyage.
In the map below we drew blue lines departing from a center marked in Spain (near Madrid, which was a small village at the time), crossing this blue "Satanazes" rectangle. This opens all directions to New Scotia and Newfoundland archipelagos. Likewise, from the same center, crossing the red "Antilles" rectangle, this leads directions to the same Antilles... that were uncovered (say discovered) by Columbus many decades later.
For sailor, directions were much more important than distances. 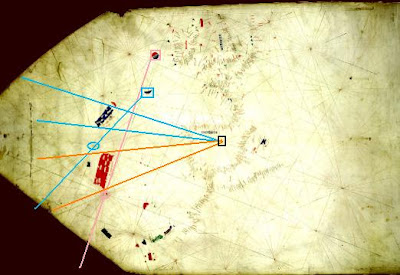 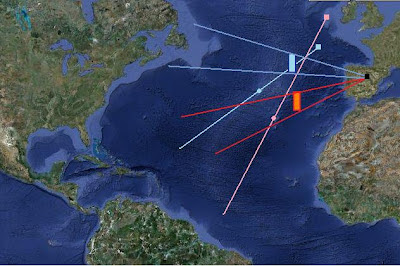 The same lines in Google Maps, showing the directions to Newfoundland and Antilles.

Again, it is just a matter of common sense:
- Officially, since 1432 the Portuguese were sailing to Azores in a regular basis.
- Azores archipelago is almost in the middle of the Atlantic.
- You need much more navigation skills to find Azores in the middle Atlantic than to find America.
- A voyage from Lisbon to Azores would take approximately the same time as a voyage from Azores to Newfoundland.
- It is much more difficult to find small islands in the middle of the Atlantic than to find a huge continent like America, unless we admit a persistent navigation to the West.


Why is this is not being told?
... Well, it may be a ball, but we were not invited to dance, we are here to serve.

5. Anian Strait or Bering Strait
In the late 1597 the Portuguese cartographer Lavanha started a map that he called "Theatrum Mundi"... this is a good title, as Shakespeare plays were starting at the time. 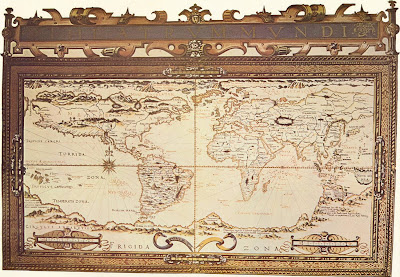 
This map is quite precise, except if you look at the bottom part, which may represent the Antartica continent (however, Australia seems to be always missing).
The most astonishing thing in this map is the precision with which the northern part of America is represented, suggesting that the Northwestern Passage, officially only discovered by Amundsen in the 20th century, was already known (at least 300 years before).
The Bering Strait is represented exactly, but since Vitus Bering would only be born almost 100 years later, it was then called Anian Strait. The map is much more precise than a 1570 Ortelius map, that also presents an Anian Regnum at the Strait location.

- What do people say about this?

Nowadays - nothing! In fact Portuguese navigations are kept hidden from almost every foreign course on History... sometimes people mention Prince Henry or that Columbus lived in Portugal.
This map is found in a huge collection called Portugaliae Monumenta Cartographica (1960), and you would expect to see some words about this there... well, you do not see anything, except some words concerning the history of the map itself, and its date.
It was dated between 1597-1612, and this would justify the presence of the Davis Strait (1587, however the handwriting is different), Nova Zemla uncovered in 1597, Hudson Bay (1611), but not the Baffin Bay (1616), not to mention the whole northwestern and northeastern passages.

- What did people say about this... in the past?
We cite the Portuguese mathematician Pedro Nunes in 1537:

"There is no doubt that the navigations of this kingdom, in the last 100 years, are the greatest, the most wonderful, most higher and discrete than any other people in the world (... The Portuguese) lost their fear so much that they went to the hottest places in the torrid zone and to the coldest places in the extreme south (...) And they made the sea so flat that today nobody dares to say that he discovered again some small island, some banks, or even cliffs, that were not previously discovered by our navigations".


Pedro Nunes died in 1578, the same year King Sebastian died in the Battle of Alcazar (this fact lead Portugal to be a part of the Spanish empire during 80 years). This foreign tragic event lead to one of the first English plays, by George Peele called The Battle of Alcazar (before Shakespeare's plays).

We are led to think that it would be quite difficult to produce an accurate map in frozen seas in the 16th century. Thus, we also present a detail of the so-called Cantino Map (Cantino was an italian spy, that sent a map to the Duke of Ferrara in 1502). This map presents Greenland with the most astonishing precision in 1502 (Corte-Real went there in 1500):

6. Hierusalem with a portuguese flag
We find in a map by João de Lisboa, a strange detail - a Portuguese blue flag in Jerusalem. 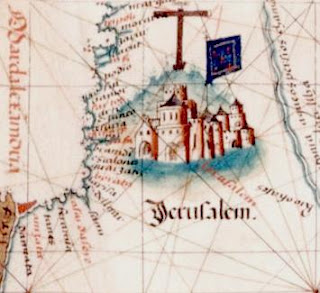 In the 12th century Crusades, the Kingdom of Jerusalem was conquered by King Baldwin, but it was then soon lost to Saladin (1187). From that date until Napoleon's short incursion into Palestine, and before the Balfour declaration (1917), it was never reported any other conquest.


However it is clear that this flag is not a coincidence.
It is known that Afonso de Albuquerque lead a huge war effort in the Red Sea, conquering even Suez (near the channel). When he was deposed by King Manuel, sending a new Vice-Roy to India in 1515, it is reported that he was intending to conquer Mecca from the Mamluks, and ask in exchange the Holy Land - Hierusalem.
Albuquerque is reported dead in 1515, in “grief with the replacement”... Soon afterwards, in 1517, the Ottomans defeat the Mamluks and assume the control of Jerusalem.


- What did happen? Are we allowed to guess?
We cite part of a message sent by the Shah of Persia, Ismail I (just before the battle of Chaldiran), to the Ottoman Sultan Selim I, in 1514:
I know the Truth as my supreme guide,
I would sacrifice myself in his way,
I was born yesterday, I will die today,
Come, whoever would die, here is the arena


As we know, Ismail was not the only one defeated in a battle in the name of Truth…