The most astonishing account of the world discoveries that survived to our eyes, is probably the one by Galvão (Antonie Galvano). We cite the 1601 preface to the translation of Discovery of the World, made by Richard Hakluyt, addressed to Robert Cecil, Earl of Salsbury, spymaster at the service of Queen Elizabeth I:

"The work though small in bulk contained so much rare and profitable matter, as I know not where to seek the like, within so narrow and straight a compasse".

Hakluyt seemed truly surprised and marvelled with Galvano's account... in particular he emphasizes the causes of the alterations of courses from East to West, and the ceasing of all traffic by the Goths invasion. This means that this information was kept secret in England, even to Robert Cecil, a spymaster... high rank English officials were starting to discover a completely different story. Some years after this publication, a civil war would be lead against the monarchy, by Cromwell.
In Galvão you may found a consistent theory with statements of previous contacts between China, Europe and America. Some of these relations are now accepted, but most of them were lost in History books, some are made myths, or simply foolish theories - you pick!
King Tubal. Galvão starts to recall the Hispanic myth of King Tubal that in the year 143 after the Biblical Deluge travelled from the Caucasus to the Iberian Peninsula. This is quite interesting as the Caucasus may be divided in three regions, Colchis, Iberia and Albania. Colchis links to the east part of the Black Sea, Albania to west part of the Caspian Sea, and Iberia was in the middle… Mount Ararat is nearby, in Armenia. 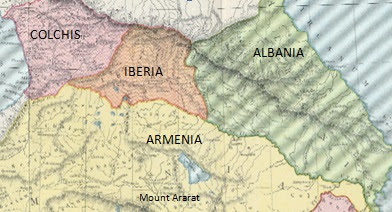 Caucasus Kingdoms: a sketch in the “Atlas of Ancient and Classical Geography” by Samuel Butler
Colchis is associated to the trip of Jason and the Argonauts, searching the Golden Fleece of its King Aeetes (son of the sun-god Helios and of the oceanid Perseis).
The association of the Caucasian Iberia and the Iberian Peninsula is only kept through this legend?
It is worth noting also that Albania became a country located west, above Greece. These caucasian lands were later connected to the Alans that invaded the Iberian Peninsula in the 5th century AD. The name Lancaster was written in Portuguese as Alancastro, meaning “Castle of the Alans”… but this is a later story.
Galvão states that navigations already took place by the time of King Tubal.
The name Tubal was associated to the portuguese city Setubal and nearby Troia (Troy, in portuguese)... until the XIX century. You may think that after the Spanish Inquisition, no such thing exists anymore, or you may wonder if a soft inquisition takes place - secrets are kept with intelligence... and agencies!
A work that is not known is not a menace, you just have to control the damage... if it happens to be known to a larger audience, you descredit them with a respectable academic lobby. You just have to wait, and people will forget about it.
Galvão also talks about the mythical voyage of the amazon queen Semiramis to Ethiopia and the defeat of an Indian King Escorobatis, with a fleet of one thousand ships, near the Hindu river.
King Hispalo. Galvano continues, stating that by the year 650 after the Deluge, King Hispalo of the Iberian Peninsula sailed up to Cape Verde. He goes even further, saying that Gonzalo de Oviedo (in “Chronicas das Antilhas”) conjectured that Hispalo even went to the Antilles, and this was the reason why Antilles were called Hesperides in ancient times. He then relates in a subtle way the Atlantis account of Plato to the whole America, and goes even further saying that their Kings were at some time the Lords of “our lands”. He goes even further, and the text is worth reading… (for instance, he mentions lost islands of Calex and Frodisias, and that Azores and Madeira Islands were just a part of a whole land. Gibraltar Strait was closed, Sardinia and Corsica were gathered, Sicily and Italy too… )
Connecting islands to main lands in ancient times, he also states that Ceylon might have been connected to India, and Sumatra to the Malayan Peninsula, profiting to declare also a connection to a nearby firm land, that he does not name... but it could be seen as a report of Australia (only officially discovered centuries after Galvano’s text).
Going further on, he reports also a probable connection between Sumatra and Java (named Samatra and Jaoa in the text) and other islands until Borneo. He also mentions a probable ancient connection between China and Hainan (Aynao) island. These explanations were given to justify some difference to Ptolemy maps that he believed that should deserve more credit.
Pharaoh Senusret. Galvão also reports sailings in Pharaoh Senusret (Sesostres) time, around 900 years after the Deluge, before the War of Troy. He also mentions that Senusret made a channel between the Red Sea and the Nile at the city of Seroum (probably Sharuna). This was made to ease the trade between India with Europe. However he then states that this took no effect “otherwise Africa would be an island”!! Anyhow, from this information, using Google Maps, we noticed a huge valley  going from the Nile into the Red Sea.