First thing: Common Sense
... to believe or not the Official "Columbus" Version? 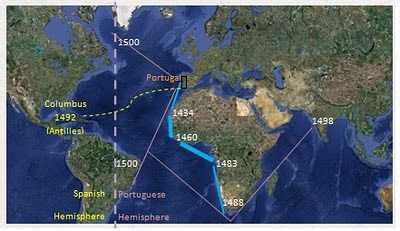 Official dates for the discoveries (1434-1500)
Official facts:
1434-1488: Hundreds of navigations, first lead by Prince Henry "the Navigator" arrive to Sierra Leone, then lead by King John II, arrive at Congo, and at most at Cape of Good Hope (South Africa). Not a single voyage to the west... excluding the regular voyages to Azores (<1432), in the middle Atlantic.
1492 - A single voyage lead by Columbus, from Cadis arrives at the Antilles.
1498 - A single voyage lead by Gama, from Lisbon arrives at India.
1500 - A single voyage lead by Cabral, from Lisbon arrives at Brazil.
1500 - A single voyage lead by Corte-Real arrives at Greenland and Newfoundland/Labrador.
After the Tordesillas Treaty (1494), when the Pope divided the world between Portugal and Spain, King Manuel set the limits of his Hemisphere - on the north: Greenland/Labrador, on the south: Brazil, on the east: India. When he took power within 3 years (1498-1500) he uncovered... say "discovered", his part of the deal.
Why? - well, of course... the main stream version:
- People believed that the Earth was flat... of course, and surely they were falling while crossing the Equator, while Columbus was still a child. They were then enlightened by Columbus... LOL!
- The main stream version is quite nice as a joke like "Columbus egg" - it is so obviously false, but people are lead to believe in what they are told.
Why are we led to a wrong version? - don't ask me, although I have my answers (which are not nice)!
Map of the discoveries/possessions in 1515
King Manuel with Almeida and Albuquerque set the Indian Ocean as a Portuguese ocean, expelling the turkish domination and arrived to China (1515). At the same time the turks were invading eastern Europe, assaulting the fleets in the Mediterranean sea, the Portuguese were menacing Mecca, and conquered Suez.
The spanish Emperor Charles V was consolidating a considerable small domination in the Mexican Gulf, while the portuguese were establishing the biggest naval domination in History, as we may see in this map: 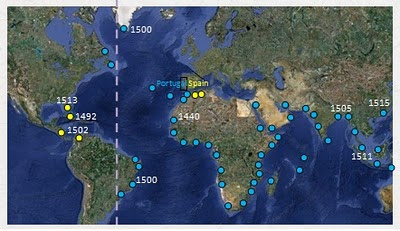 Discoveries until 1515. Portuguese (blue dots), Spanish (yellow dots).
Despite the portuguese arrival at Timor in 1514, Australia was only discovered by Cook in 1770... of course! - It makes a lot of sense, and all those that tried to prove otherwise had some trouble in publishing the proofs.
Well, since (almost) all maps before 1500 disapeared, it is time to present some main contradictions that have been left behind.
1. Turning a Reinel Map (1485)
Reinel's map of 1485 was found in a library in France, only in 1960. Some people tried to date it after 1500, however there is Moorish flag in Granada, that only fell in Spanish hands in 1492, the year Columbus departed... This is only inconvenient if you turn the map around, since you might see a nice Central America contour, some years before Columbus voyage... 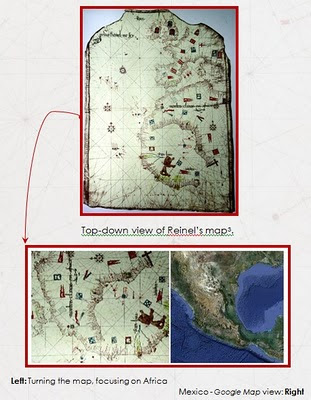 Surely this is just a remarkable coincidence... as this knowledge would only be possible according to the official version, until at least 50 years after. Is it so?
2. Map of part of America - João de Lisboa (died 1525)
In a partial map of central/south America, João de Lisboa decided to put some Portuguese (and moorish) flags in Peru/Colombia... however since the spanish Pizarro expedition to the Incas occurred in 1529-32, this is also an inconvenient map. Despite the book where these maps are, called "Livro de Marinharia", was signed by João de Lisboa saying "made in 1514", the official cartography dates this as 1560... after the author was dead! Even so, this does not justify Portuguese or Moor castle in the Incas territory. 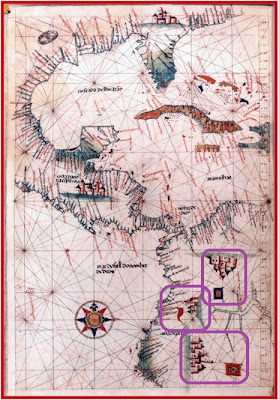 A map by João de Lisboa, in a book signed 1514.
(magenta squares show the portuguese/moor flag castles)
This is also a complementary proof to the Duchess Medina-Sidonia theory that the Moors were sailing to America before the Spanish... This was presented in the 500 anniversary of Columbus arrival, but kept aside from the general public! We believe that a Portuguese castle was the Castle of Saint George of the Mine - confusing itself with a similar name of a fortress in Africa. This was a general strategy - mixing african and american names.
3. Map of the World - João de Lisboa (died 1525)
In the same book by João de Lisboa, we find a remarkable world map: 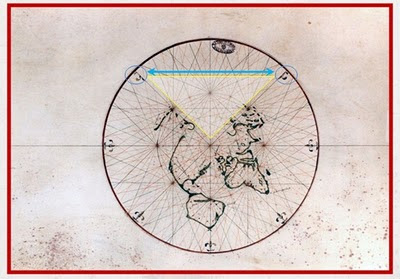 World map by João de Lisboa, in a book signed 1514.
(yellow triangle is to be skipped and glued by the blue line spots)
Even if we accept the 1560 official date, this maps shows a very good world map, superior to most maps until Cook (1770). It has a contour of the western part of North America, that was "not allowed" after 1600... the contour does not close America to Asia, assuming an opening at the Bering Strait (Bering was born in 1680).
This map could never been dated to 1514, because it also shows the Magellan Strait, only crossed in 1521, and Japan, only uncovered in 1543. Unlike any other map around 1560 it does not mention the Magellan Strait, only the Cape of Good Hope... this is now justified, also Galvão (a portuguese hero of the XVI century) reports there were maps signaling Magellan Strait around 1428 - at that time it was called Dragon Cola (Dragon's Tail).
Furthermore, all small flags in this map are perfectly justified in a 1514 map, but not afterwards - for instance, Albuquerque conquests of 1515, in the Arabian peninsula, are not signaled.
(... to be continued)
Publicada por Alvor-Silves à(s) 23:25 5 comentários: 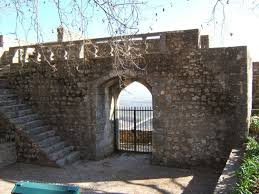 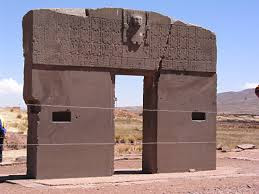 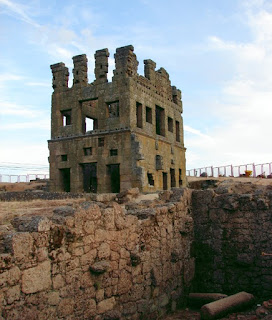 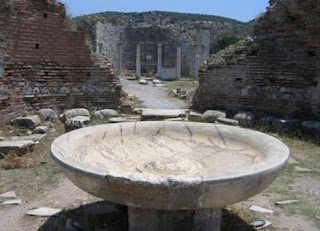 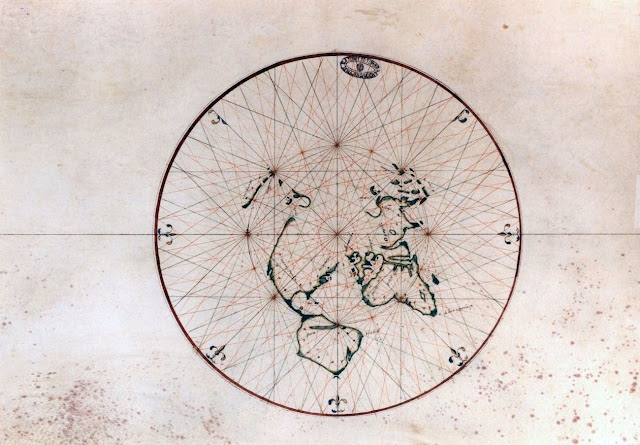 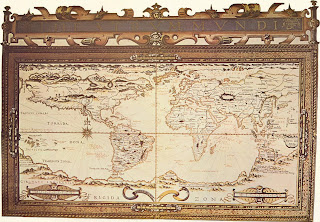 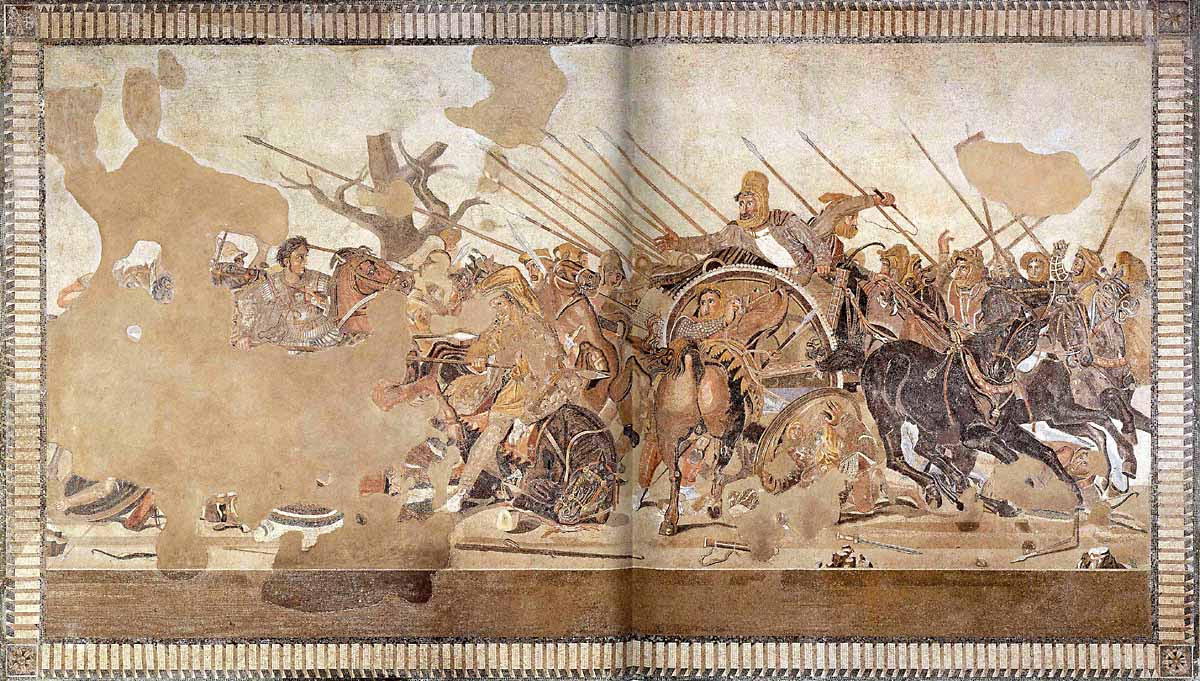 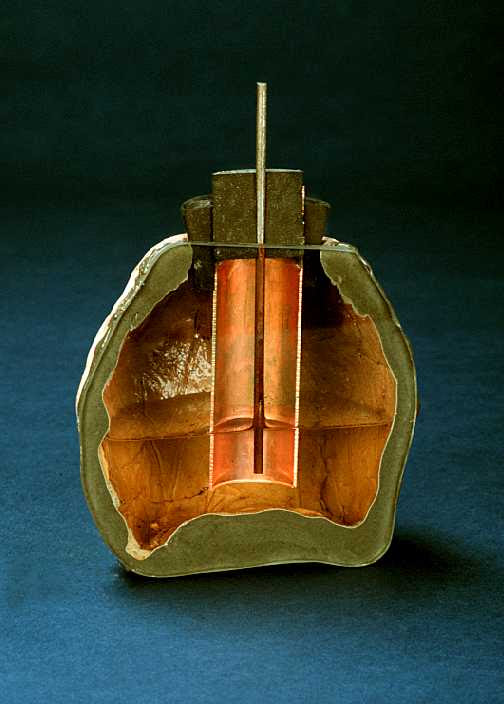